Wait—are those birds carrying army pocketknives around??? Well, sort of. Birds don’t need to snatch our knives because they’ve got multi-tool knives built right into their bodies: their beaks.

Birds’ beaks differ greatly depending on what they eat, but all beaks are strong while also remarkably light (flying creatures avoid hauling excess weight!). A beak is made of spongy bone inside, covered first by a thin layer of more solid bone, and then by a layer of hard keratin—the same material as our fingernails. The keratin repairs itself whenever the beak gets scratched.

Beaks that attack bugs have all sorts of special features:

= Falcons, kites, and shrikes have beaks with sharp little projections like teeth on their edges, which they use to cut through insects’ hard exteriors.

=Many flycatchers have bristles at the base of their beaks: they sported the mustache-with-goatee look long before Hollywood stars did! Scientists aren’t sure what the bristles are for—maybe to help the bird sense an insect in the air, or maybe, once the bird has caught an insect, the bristles stop body parts that have broken off the insect from getting into the bird’s eyes.

= A meadowlark hunts for bugs by putting its closed beak into matted grass. Then as it forces its beak open, the meadowlark looks into the gap in the grass that its beak created. If there’s a bug there, the meadowlark instantly sees it and gobbles it up.

= Woodpecker beaks are thick and very sharply pointed so they can chisel into wood for tasty insects. The bone and keratin are also different lengths in the upper beak compared to the lower beak. These length differences help absorb the physical stress of all their pounding in just the right way to reduce how much their brains get rattled around.

= Beaks usually have an overhang at the tip of their top portion—an area that curves downward, which is sometimes large and sometimes small. Scientists think that birds use the overhang while preening their feathers in order to crush parasites against the lower portion of their beaks. Nobody likes parasites!

=The American robin’s straight, sturdy beak is the perfect tool for pulling worms out of the ground. It’s been calculated that a robin can eat up to 14 feet of earthworms in one day!

=The tiny golden-crowned kinglet survives by using its sharp beak to eat insects almost constantly. The amount of food it eats compared to its size is startling. If a 100-pound human ate at the same rate, proportional to the human’s size, that person would have to eat 27 large pizzas every day!

So for bug-eating birds, a beak can be a knife with a tooth, a sensor, an eye shield, a grass mover, a wood cutter, a shock absorber, a parasite crusher, a worm puller, and a massive survival mechanism. Yet beyond their adaptations for eating bugs, beaks serve in many more roles—as hatching tools, percussion instruments, sifters, shell and grain splitters, courtship signalers, baby feeders, feather adjusters, temperature regulators, transport tools, dip nets, and plant piercers, among others. Beaks are marvels of nature, and the more you learn about them, the more you think, “Wow, can I have one of those?” 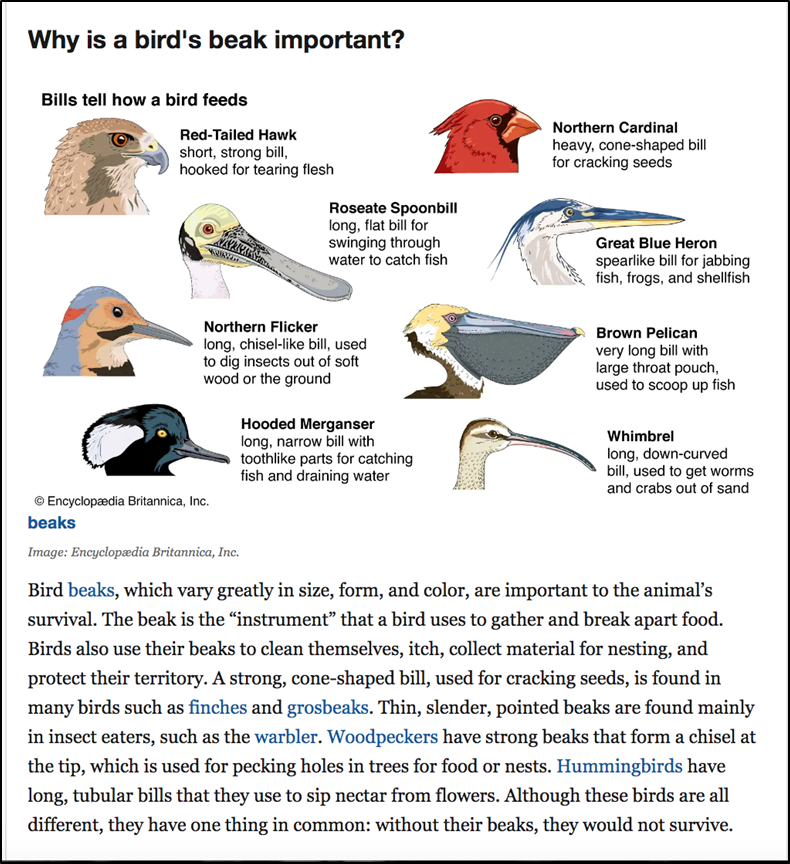