Buds for Birds – Be a Buddy to Birds – Plant Native!

Buds for Birds – Be a Buddy to Birds – Plant Native!

Many of us embrace the beauty of the winter landscape when the first flakes of the year fall. By the time that February rolls around, though, we’re tired of snow and worn down by the effort of coping with the cold. Birds may not exactly share our emotions about winter, but as cold weather wears on, they also face extra challenges. Many insects are long gone or inaccessible, and most of the easy pickings of seeds and berries are used up.  What’s a bird to do? 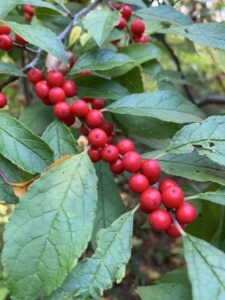 Hollies to the rescue. As we’ve talked about before, overwintering birds in Pennsylvania that rely heavily on insects during the warmer months must shift their diet toward other food sources. We’ve talked about dogwoods and viburnums and how they provide valuable berry sources for the fall. Those favored berries disappear quickly, though, and birds need more to get them through the winter. That’s where the hollies come in. Holly berries ripen in the fall but tend to remain uneaten until mid-winter.  Why?  I’ve seen them referred to as bird spinach – edible but not well-loved.  Many sources say that their palatability to birds increases after they’ve frozen and thawed a few times, which softens them. Whether this last bit is true, or whether birds just buckle down and eat their spinach when more favored foods have run out (which tends to coincide with having gone through a few freeze-and-thaw cycles), I don’t know for sure. Has anyone has done the experiment of artificially putting holly berries through some freeze-and-thaw cycles early in the season and then offering them? I doubt it.  Anyway, one way or another, holly berries tend to remain available until mid-winter, when hungry birds dive in.

I have several species of holly in my yard, and each year around mid-February, a mockingbird shows up and chows down for a few days.  A flock of robins also usually materializes and strips the rest of the berries clean. (Yes, many robins do winter in the Lehigh Valley! – but they roam around looking for berries, so if you don’t have any, they’re not likely to be at your house.) Other birds attracted to holly berries include Cedar Waxwing, Eastern Bluebird, Hermit Thrush, Northern Flicker, and Northern Cardinal.

Does your winter landscape look dreary?  Hollies have several features attractive to humans, too. There aren’t many native trees or shrubs that stay green all winter in Pennsylvania.  A number of hollies hold their deep green leaves all winter, providing some color and good screening when other trees and shrubs are bare. The bright red berries are also a winter treat for humans – a visual treat, not one that is edible to us. In fact, if your tree or shrub can stand a bit of pruning, some of those green branches with their red berries make a nice arrangement for a mantelpiece, vase, or other holiday display.

What about the other seasons?  Hollies do have virtues year-round. They sport tiny white flowers in May to early June that are attractive to pollinators. The flowers aren’t much to look at from a distance, but up close they are pretty, delicate little things. (The berries later develop along the branches where the flowers were.) Most of the hollies are shrub-sized or small trees, which is a benefit for smaller properties or locations near a house, while other native evergreen choices such as white pines or hemlocks could end up towering 80 feet or more. So they can be a good choice for foundation screening or hedges or other functions where you’d regret having no leaves for half of the year. And there are a number of different native holly species that suit different kinds of needs.

So let’s talk about some!

Winterberry Holly (Ilex verticillata). This one is a favorite for landscape use because of its abundant, conspicuous bright red berries. This species does not hold its leaves in winter. The leaves drop in the fall, when other deciduous shrubs and trees are losing theirs. Then you are left with branches loaded with red berries that look dramatic against the snow or encased in ice. It is a medium-sized shrub and is versatile because it can take average to wet soil – in fact, it is often used in wetland plantings. It can also tolerate part shade. A grouping of winterberry shrubs makes a great winter sight and is a great resource for birds. There are smaller and more compact varieties available if a full-sized winterberry is too big for your space. Just avoid cultivars with larger than normal berries, which are ornamental but may too big for many birds to swallow.

Inkberry Holly (Ilex glabra). Inkberry is a smaller shrub that also looks good in groups or serving as low borders or hedges. Inkberries do hold their leaves all year, which is a benefit where screening or the look of greenery year-round is desired.  They produce small black berries (the reason for “ink” in the name) which are not particularly ornamental, but which are also a good bird food. You may not readily recognize inkberries as hollies, because their leaves are smooth ovals, not spiny like those of many hollies. Inkberries do tend to become leggy but can be cut back to encourage more fullness, or they can be planted around with lower plants. Also, fuller and more compact varieties are available. Inkberry can also take from average to moist soils and sun to part shade. 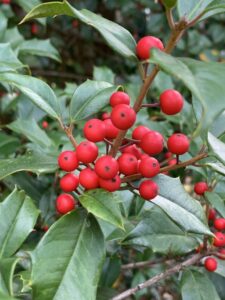 American holly (Ilex opaca). This one is a small tree that stays green year-round.  Its dense and somewhat prickly foliage make it a good shelter and nest location for songbirds. If you are familiar with the commonly grown English holly, you will find it is not nearly as spiny as those – wow, those are really vicious! American holly produces a good crop of red berries that are attractive against the green leaves. It is also tolerant of moist soils and can take some shade.

Some Important Considerations. Most crucial to understand is that hollies have separate male and female plants, and only the females produce berries. So you need females if you want berries. But they also need to be pollinated in order to produce, so you also need at least one male somewhere nearby. Second, there isn’t an iron-clad guarantee that you’ll have beautiful berries into mid-winter even if your plants produce a nice crop.  Some years my winterberry berries are there until February, but other years they get scarfed up much earlier. The culprit is most often squirrels – sometimes they must fall short of other food sources in late fall because they gobble them up. (Why can’t they stick to plundering the bird feeders?) This year, to my surprise, robins showed up much earlier than usual and stripped them all by November. I heard the same from other people this year. (Hmm, does this speak against the necessity of freeze-and-thaw cycles to make them palatable?).  My American holly berries are less likely to disappear early, although I think that this year they are also getting consumed somewhat ahead of schedule. Last – many hollies like acidic soil, so check the cultivation requirements of any you buy. You may need to apply an acidifier once or twice a year.