LIGHTS OUT Programs:  Do they help, and is it worth the effort? The short answer is YES! But it’s not that simple.

Reading the news reports, on the night of the first and morning of the second of October 2020, over a thousand birds died in Philadelphia colliding with glass in a small block radius in downtown. Totally tragic and mostly preventable. Yet reading the news reports also seemed to offer reassurance, as one stated that a similar event had not happened there in the past 70 years. Unfortunately, the reporters didn’t have the whole picture. 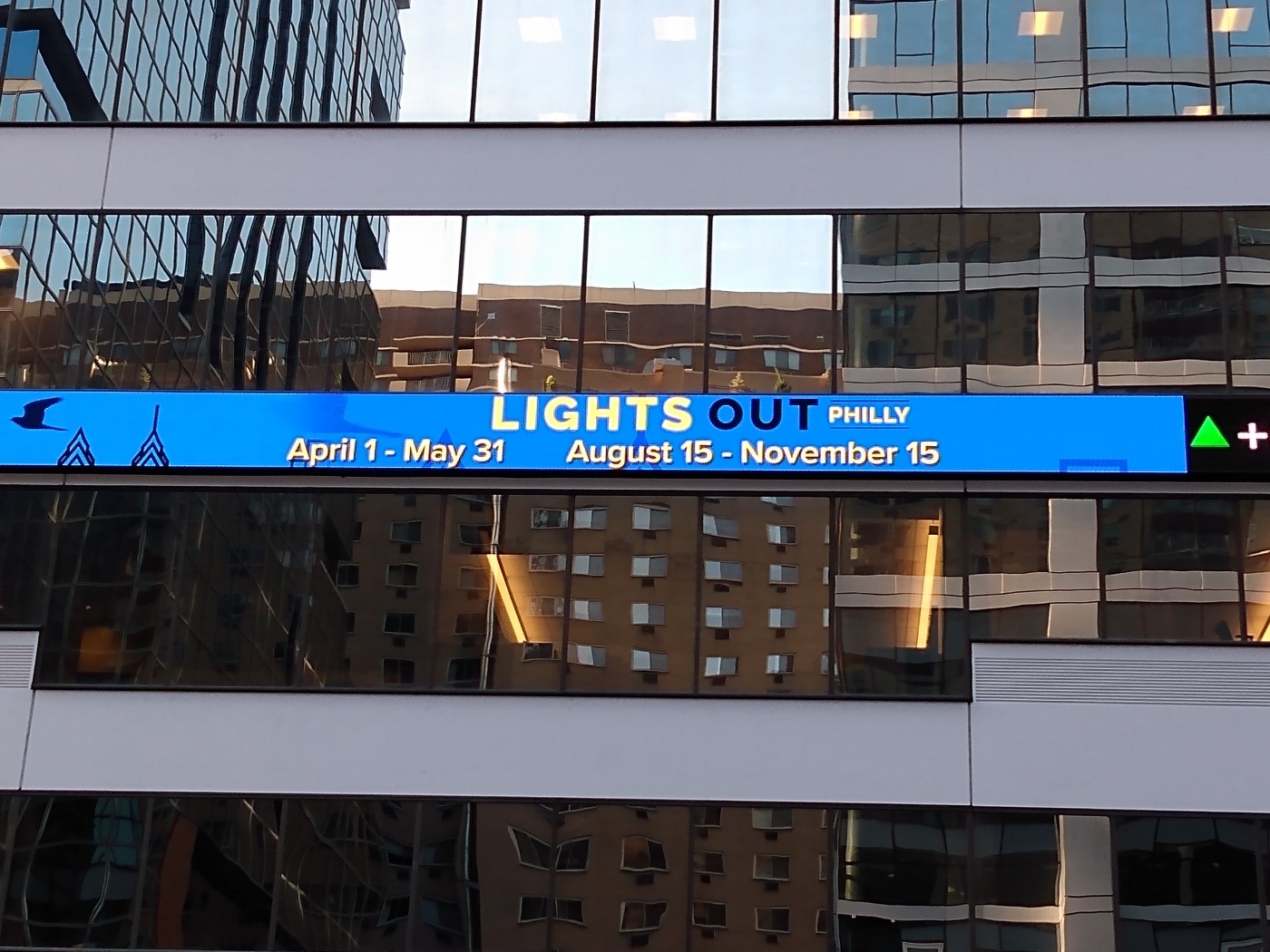 The first thing people need to understand is why these mass collision events occur. It takes three major factors to occur simultaneously, a perfect storm, to cause a mass collision event. During migration, nocturnal migrants usually choose clear nights with favorable winds. The favorable winds the birds look for sometimes occur at very high altitudes (10,000+ ft), but in general it is safe to say that most are flying thousands of feet above the landscape for most of their journey. On these clear nights nocturnal migrants are far above and safe from the effects of city lights. However, when nocturnal migrants fly into less-than-favorable weather conditions like low, heavy clouds, fog, and precipitation, which can force them to fly lower, their troubles begin. If you have tens of thousands of migrants already on the move, and they run into these unfavorable conditions near or over a city with bright lights, this is when and where mass collisions are possible. Imagine driving along a highway on a clear day and suddenly being hit by either a heavy downpour or a heavy snow squall. You can go from being able to see fine to being totally blind in seconds. Even a better example of what the birds can experience is driving along on a clear night and running into a thick fog bank with blinding reflections of white. So, for a mass collision event to occur, three things must come together: 1) Large concentration of migrants, 2) Inclement weather, and 3) A bright city nearby. All three conditions at the same time is not so common, which is why even nationwide these events are not reported annually.

This is not to say that thousands of birds are not forced down more often, into the surrounding neighborhoods and suburban areas, only to face the uncountable windows at dawn, as well as outdoor cats and the multitude of other human-caused hazards. There, when a bird dies here and there, even if thousands die in a single morning, they go mostly unnoticed. Mass events in downtown areas occur where sidewalks don’t hide the dead and dying, hundreds of people witness this, and reporters document it. By contrast, the casualties that are spread out through large areas—with vegetation often hiding the bodies—are simply not counted.

The annual USA death toll due to bird-window collisions is between 365 million to one billion. Using the LOW estimate equals an average of one million a day. A peer-reviewed, scientific paper stated that 54% of window collisions occur at low-rise buildings like college and corporate campuses, 45% occur at residential homes, and only 1% occur at high-rise buildings.

Back to our question: are Lights Out programs worthwhile? “Yes” is the clear answer because they save bird lives, save dollars, and help reduce light pollution. A city with a Lights Out program can save thousands of lives in a season.

But even if a city has had few or even no obvious mass mortality events in a downtown area, there have probably been many more hidden mass fallouts when thousands of migrants have descended prematurely due to inclement weather into habitat less than prime for them and containing the many hazards that we humans have created. So the next step is to get people to treat their windows in the surrounding jungle of glass, to prevent the much greater number of birds that die there, unnoticed and uncounted. Remember, 1% of the millions of deaths occur at high-rise buildings and the other 99% occur where individuals can make a difference.

Think, a minimum of 45% or 164,250,000 U.S. birds die at windows every year that do not need anyone’s permission to make bird-friendly, other than YOUR permission. Do you care, really? 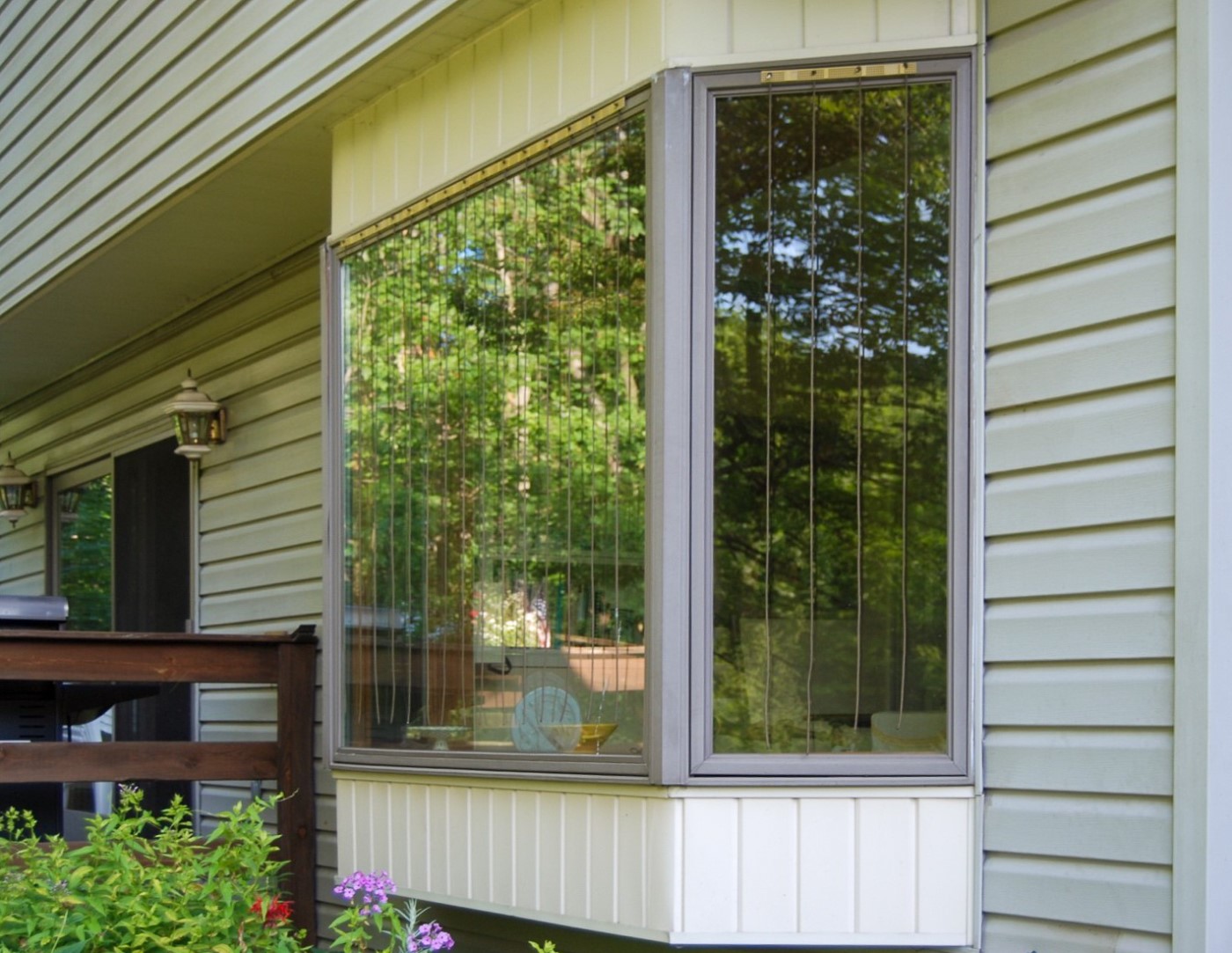 Notice how this window reflects the natural surroundings; there appear to be trees inside the house. Birds misunderstand the situation and slam right into the glass. This particular window, however, has the elegant cords of Acopian BirdSavers on the outside, so the reflection is interrupted with visual obstacles. Birds looking at this window perceive that they’re blocked from reaching those inviting “trees” inside. They don’t attempt to fly through the cords, and so this type of window treatment is quite effective at saving birds’ lives!