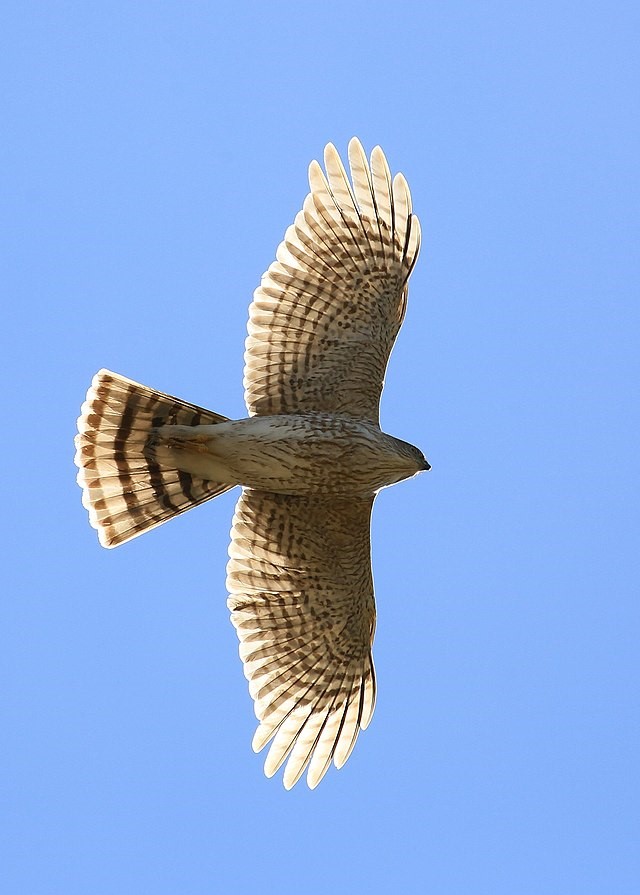 Your local grocery store closed down—what to do? You get in your car or on your bike and ride the roads to a grocer farther away. Birds react the same way: when cold weather closes down their food supplies in the north, they migrate south using their own ingenious transportation tools and tricks: elaborately engineered flight feathers and air highways complete with winding on-ramps!

How do birds of prey pull off migrating hundreds and often thousands of miles? Scientists call each flight feather on their wings a remige, which in Latin means “oarsman,” because these feathers are stiff enough to create a strong thrust against the air on the wings’ downward strokes. The feathers farthest from the bird’s body have the additional extraordinary adaptation of being able to rotate individually. Think of the blinds on a window: you can move them up and down, but you can also change the angle of the slats. A bird can change the angle of some outer wing feathers in one way and others in a slightly different way, depending on wind conditions! These “primary” flight feathers generally rotate on the wings’ upward stroke. The feathers’ new, more vertical, temporary position reduces the drag of air friction. Then the feathers rotate back to a flatter position for the downward stroke. Wow! This all happens quite automatically, but the bird senses the changes and can make voluntary adjustments as well.

Much more is truly amazing about flight feathers, including those in the tail, but the highways of migration also deserve admiration. Hawks cleverly take advantage of thermals, which are spiraling columns of rising warm air surrounded by cooler air. Thermals tend to occur near mountain ridges because the sun’s rays warm one side of a ridge more than the other. The birds ride upwards on the air-current on-ramps until they reach a high gliding altitude. They glide for miles, gradually losing altitude until they reach another thermal. This process minimizes the need to flap, so the birds can save strength for their long journeys.

Flight feathers and thermals—look up and treat yourself to their marvels!

Photo Sharp-shinned Hawk Flying, by Seabamirum, licensed under CC BY 2.0