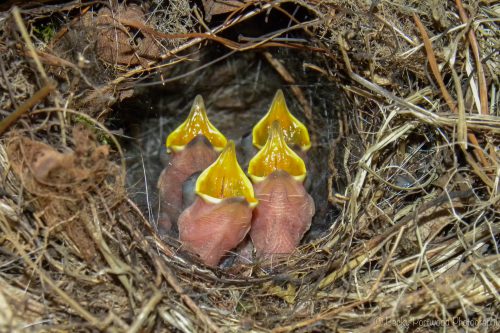 Wren babies begging for food; Printed with permission from the Cornell Lab of Ornithology

Hidden in bushes and trees all over our region, parent songbirds will soon be feeding adorable little hatchlings.  The babies have fragile throats, so they need soft food.  Fortunately, nature provides the perfect squishy protein packets for the hungry little ones:  caterpillars!  For most songbirds, caterpillars are the main baby food, and the babies eat A LOT of them.  Consider the tiny, black and white Carolina Chickadee.  Depending on how many eggs Mama Chickadee lays, she and Papa Chickadee will need between 6,200 and 9,100 caterpillars to raise that one set of babies.  And you thought you were busy!

BUT when humans spray chemicals to kill mosquitoes, the spray kills many other bugs too (even if your spray company claims it doesn’t)—including those precious caterpillars.  So while we humans are killing the mosquitoes, we’re literally starving the baby birds.  If we keep acting this way, there won’t be many songbirds left; in fact, the number of songbirds in the U.S. has gone down by one-third in recent decades.

Fortunately, there are better ways to deal with mosquitoes.  This one works great:

Put a five-gallon bucket of water in a sunny place in your yard and add a handful of hay or straw. After a few days, the resulting brew is irresistible to egg-filled female mosquitos. After the mosquitos have laid their eggs, add into your bucket a mosquito dunk tablet that contains “BTI,” a natural product that kills mosquito larvae soon after they hatch, before they’re old enough to fly or bite.

A “mosquito dunk” tablet only costs about $1.50 (less than harsh insecticide sprays) and can be bought at ordinary hardware and gardening stores.  The tablets are safe for birds, pets, fish, almost all other insects, and wildlife. You kill mosquitos, and possibly also fly larvae, and only them.  Since the caterpillars survive, the chickadees and other songbirds can survive too!